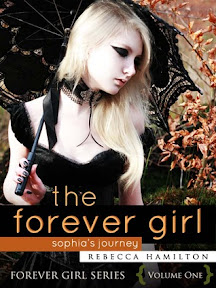 After finishing a book that dragged on a bit, I was anxious to read something that would be a little quicker paced--and something different from the thrillers and mysteries I'd also read recently. And so I opened my Kindle, looked through my bookshelf, and settled on The Forever Girl by Rebecca Hamilton.

I discovered the author through Twitter and was curious about her book, so seeing that it was only $2.99, figured it was worth giving a try. I began reading the book one Friday morning while Mouse was sleeping in. Of course, she had to wake up at the worst possible moment, in a spot I really didn't want to have to stop reading. Isn't that always the way? It would happen several other times as I snuck in reading moments here and there--either the baby or my husband would interrupt me. Still, I stole those reading moments when I could--even in the car on the way to breakfast the Sunday morning I finished the book. Yes, I was that hooked.

The Forever Girl: Sophia's Journey is the first in a series about a young woman with paranormal abilities. She suffers from an incessant hissing in her mind that she can't seem to shake. Those hisses eventually turn to voices. In an effort to silence the voices by breaking the curse she is sure was brought on by an ancestor accused of witchcraft, Sophia dives into her research. Through a friend, she is introduced to a world she never knew existed, one of magic and the supernatural. Her life is suddenly thrown into turmoil, where life and death become an issue and she is faced with difficult decisions, including whether to pursue forbidden love.

The Forever Girl was entertaining on many levels. I especially like the world Hamilton has created. While many of the supernatural characters are familiar (vampires, shape shifters, witches), Hamilton adds new and old layers to them, making them all the more interesting. She uses the five Wiccan elements to shape the mythology in her books.

The main protagonist, Sophia, is your typical urban fantasy/paranormal romance heroine. She is tough and has a few emotional scars from earlier hurts. She isn't quick to trust and is skeptical of people's motivations. I liked her right away. The other characters in the novel were quite intriguing, some I hope make more of an appearance in future novels so I can get to know more about them. I especially liked the character of Ivory, including her back story. I suspected something was up with her character early on but her actual story was much more complicated and fascinating than I anticipated.

There were certain aspects of the novel that I wish had been explored more fully, including the resolution to secondary storylines, like that of Mrs. Franklin. It seemed to end all too quickly and succinctly. And yet, in regards to the romance aspect of the novel, I felt as if it lingered on a bit too long in the middle. But that isn't to say I didn't like the romantic pairing or the conflict between the two. I found it quite interesting, actually.

Overall, I enjoyed The Forever Girl and am not too happy I have to wait to read the next book in the series. I like the world Rebecca Hamilton has created and am anxious to visit again.

You can learn more about Rebecca Hamilton and her book on the author's website.