Sunday Salon: A Book about Reading & What I am Reading Now

In my August 10, 2008 Sunday Salon post I wrote: "It is my intent to stretch out the reading of this book, reading snippets here and there in between my other reading." And I certainly did stretch it out! Over a year later, and I finally was able to finish Leave Me Alone, I'm Reading: Finding and Losing Yourself in Books by Maureen Corrigan. This was that book I referred to at the beginning of the year, the one I found hidden in a basket of reference books. It was never my intention to put off finishing the book, much less to wait so long to get back to it. There's no time like the present, eh?

I have only read a handful of memoirs focusing on a reader's love of books. Sara Nelson's So Many Books, So Little Time: A Year of Passionate Reading and Reading Lolita in Tehran: A Memoir in Books by Azar Nafisi come instantly to mind. There's always a risk to reading such books: running into possible spoilers of books I have yet to read and not being familiar with the books talked about, perhaps feeling a bit lost as a result. And what about all the new titles added to that wish list? Now there's a positive--or a negative depending on how you look at it. That would surely be the case with Maureen Corrigan's memoir.

Picking up where I last left off, I had no trouble jumping right back into Maureen Corrigan's narrative about how books have impacted her life and vice versa over the years. In the final two chapters of the book, she discusses the influence of her childhood and faith on her reading and how those early books she read influence her life to this day. She also goes into how her view and expectations about relationships were impacted by her reading, including those of a romantic nature. Books opened her eyes to an entirely different world and it lead her down unexpected paths. They also helped shape her values and ideals. On a broader scale, Corrigan talks a little about the changing nature of literature over the years, something I found especially interesting.

Corrigan included a coveted "Recommended Reading" list near the end of the book, which, of course I found irresistible. While several of the titles she mentions I have read and enjoyed (Jane Eyre, The Maltese Falcon, and Pride and Prejudice, just to name a few), there are many others I have not yet tasted and some I had never heard of before that are now on my wish list, especially from her mystery and suspense list. She reminded me that I need to dive back into Sara Paretsky's series and finally get around to reading Ian Rankin and Henning Mankell. Black and Blue by Anna Quindlen, Straight Man by Richard Russo, and Bleak House by Charles Dickens are among some of the titles that I must read.

Do you ever read memoirs about books and reading? If so, do you have a favorite?

At some point this year I hope to get to Nick Hornby's collections of essays about books and reading. I hear they are irresistible.

This past week I also read an intriguing mystery set in Italy--Umbria to be exact. It is called A Deadly Paradise and is by Grace Brophy. It's the second in a series featuring Commissario Cenni, and now I am anxious to get my hands on the first. I love a good mystery set in a country other than my own. This particular one delves a little bit into World War II history, although it is set in the present day.

Yesterday I began reading Umrigar Thrity's The Weight of Heaven, a book I have been wanting to get to since I first heard that it had been published. It is about a couple who lost their child to death and are trying to re-establish their lives. I jumped at the chance to be a part of the TLC Virtual Book Tour when I saw it coming around. I have read two books by Umrigar before, both very good, and am anxious to read more by this great author. There will be a giveaway of The Weight of Heaven (I have an extra copy since I bought my own) so be sure and visit on my tour date (February 1st) for a chance to win.

Speaking of giveaways, tomorrow I will be posting my review of American Rust by Philipp Meyer along with a giveaway of Meyer's book. I have two copies for giveaway, one for U.S. and Canadian residents from the publisher, and the other my own copy of the book that I will be giving away to someone outside of the U.S. and Canada. I hope you will stop by!

I am determined to read a Sarah Waters novel this year as so many readers have sung her praises. The question then became, where to begin? I put it to you to help me decide which book I should start with of all her novels. Many thanks to each of you who participated in the survey.

Fingersmith is the clear winner and seemed to get the most praise even on Twitter when I mentioned my survey there. I am looking forward to reading Fingersmith later this year and seeing what all the fuss is about. To those who voted for the other books, this doesn't mean I won't read those at some point in the future as well. Just that I am starting with Fingersmith.

Good news! To me anyway. On a whim I put my name in for a chance to win a bookcase over at Myckyee's BookBound. And I won! The bookcase (from CSN Office Furniture) arrived in the mail the end of last week. I have not yet had a chance to put it up (still deciding exactly where it will go), but already have the books to fill it. I will be sure and take photos of before and after so you can see how it looks.

On the not so good front (and non-book related), Anya is having serious health problems at the moment, and we're waiting for the final test results to come back to see how to proceed with treatment. She's a real trooper and is hanging in there. Please keep her in your thoughts and prayers. Thank you.

Edited to add: The veterinarian called this morning as promised. There's still more testing in store for Anya, unfortunately (including a possible bone marrow biopsy) but we're getting closer to finding the root cause. I truly appreciate all of your thoughts and prayers. 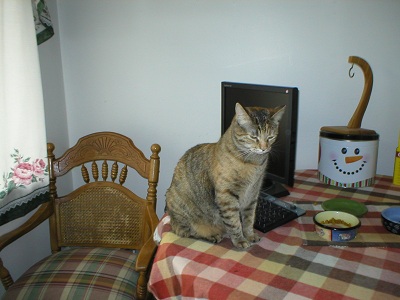