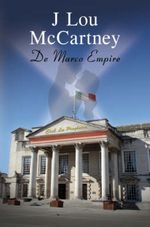 It was the day of the preliminary hearing and the closed court room was for immediate and close friends only. The press was banned from the building and the surrounding vicinity, which spanned three miles in every direction, but they had helicopter coverage, so hopefully if anything significant happened they wouldn't miss it. The whole process was being carefully monitored by the Metropolitan Police force. This was going to be a high profile case, one that the public would be very interested in the eventual outcome. The de Marcos were very well respected and had brought a lot of business and employment to the area over the years. [From the Prologue]

I first came across mention of De Marco Empire by J Lou McCartney at Yvonne’s blog, Socrates' Book Reviews. Romance is not my preferred genre, at least not by itself, but I was fascinated by the storyline: young woman falls in love with successful businessman with a sordid past. The mafia has always held a certain appeal for me—at least the mafia in the fictional world.

The novel opens with the beginning of a murder trial. Katie stands accused of killing her husband on their wedding night. She insists she did not do it. Her defense attorney and long time friend, Matt Carmichael believes her and is determined to prove her innocence. Taking us back in time to the night Katie and her husband met, the story unfolds.

For all intents and purposes, Antonio de Marco really does want to put his criminal past behind him. He has moved on to make a name for himself running numerous legitimate businesses. He and his brother left Italy shortly after the murder of their parents and young sister when attempts to seek vengeance against those they believed responsible failed. Gianni and Antonio have always lived on the edge. Gianni is less inclined to follow his brother’s lead in terms of sticking to the legal side of life, and while Antonio is trying, he still hasn’t completely given up his old habits.

When Katie Saunders walks into his life, he knows he must have her. She is a smart and beautiful young woman, innocent but definitely no push over. The only catch? She has a boyfriend and Antonio has a fiancée, the ever insufferable Sasha Breschnevsky. The two are destined to be together, however, and once the obstacles are dealt with, Antonio is determined to win Katie over. Katie hasn’t a clue what world she is about to enter. It is a world of nightclubs, drugs, sex and murder, where extortion and rival wars are the order of the day.

McCartney’s novel has a seductive quality to it that drew me in and held me captive. I could not wait to see what happened next. The story was compelling, but the writing nearly lost me. One of the many tasks I do in my day job is editing reports, and, while I may not be any good at editing my own writing, I have an eye for catching others’ mistakes. And this novel was full of them. Enough to pull me out of the story at times. Then there was the little issue of the narrative voice. While I enjoy reading books written in third person omniscient, I was not used to the sudden and constant shifting in character viewpoints with no break in the text or warning in the change of perspective. Fortunately, this only was a problem in the first few chapters and the shifts were better defined for the majority of the book. To put it into perspective though, I wasn't too keen on the writing of the Twilight series by Stephanie Meyer, and yet I still gobbled up each of her books. There was just something about them that had me craving more even in spite of my reservations about the writing. It was similar with De Marco Empire. Normally such issues would completely ruin a book for me; however, in this case, the story was enough to carry the book for me, and I read late into the night.

I liked Katie Saunders, but I did have trouble relating to her completely. Katie is a bit too perfect. She’s got it all: perfect body, naturally beautiful, thoughtful, intelligent, succeeds at everything she tries, and just about everyone loves and adores her. I think her only flaw is her choice in men, really.

It isn’t too surprising that Katie fell quickly under Antonio’s spell. Many women are drawn to the mysterious bad boy who has plenty of money and good looks, especially when he throws on the charm. Antonio was definitely charming, even if a little domineering and moody. I give him credit for not being so rigid in his more traditional beliefs. It was obvious he loved Katie and would do anything for her, even letting her be her own person.

The best characters in the novel, the ones I most enjoyed reading about, were the not so good ones and the downright evil ones. They had a lot of personality, not to mention were the most interesting. I loved hating them and couldn’t get enough of them.

J Lou McCartney’s novel was certainly suspenseful and kept me entertained even in spite of my reservations. De Marco Empire is the author's first novel, and if it’s anything to go by, the author shows a lot of potential.

You can learn more about J Lou McCartney and her books on the author's website. Many thanks to the author for graciously offering me a copy of De Marco Empire for review.