Monday At the Movies: Burn After Reading & Movie Watching Style

In this dark comedy from Joel and Ethan Coen, ousted CIA official Osbourne Cox (John Malkovich) loses his recently penned memoir into the hands of a pair of moronic gym employees (Brad Pitt and Frances McDormand, in a Golden Globe-nominated role) who use it to try to turn a profit. George Clooney and Tilda Swinton round out the cast of this irreverent farce, which was nominated for a Best Picture (Comedy) Golden Globe. 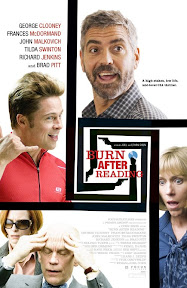 I really do not know what to say about this film. It is dark. It is funny. And it is completely insane. I really wasn't sure what to expect going into it and now having seen it, I'm not really sure what to make of it still. The characters are quirky and the plot is way over the top. I am still in shock over one particular pivotal moment in the movie. It happened so fast! Anyway, I am not sure what else to say about this film. Did I like it? I did, but it was very unusual and not for the faint of heart.

The Monday Movie Meme is brought to you by The Bumbles.
This week's movie topic is all about How You Watch Your Movies . . .

If you play along with this weekly meme then obviously you enjoy movies. But how do you watch them? Do you wait in line for the big premier at the theater? Do you savor trips to the local video store perusing the titles up and down the aisle? Or maybe you only watch them from home as they arrive in your mailbox, inbox, or on T.V. And maybe who you watch them with dictates how you watch them.

I love going to the movie theater. There's something about sitting in a gigantic darkened theater, with the sound bouncing off the walls, sometimes making the entire room shake, that I find irresistible. Some movies are just meant to be seen on the big screen. While on occasion the crowds may bother me or a particularly annoying person (cell phones, crying babies, incessant chattering), more often than not I find seeing a film with other moviegoers to be part of the charm of the theater experience. There is something magical about seeing a movie in a theater. Not to mention that I am not always the most patient person in the world when it comes to seeing a movie I have wanted to see since I first heard it was being filmed.

During our college years, my husband and I spent a lot more time at the movie theater than we do now. Not having our own transportation and being limited in resources, the theater was an easy escape from campus life. To this day, we try and go at least once or twice a month, sometimes more often if we can swing it. We've never been big on concessions and so you will not see us loading up on popcorn, drinks, and candy. Sometimes we may get a pretzel and split a drink between us, however. My most favorite time to hit the theater is for that first showing. There's rarely a crowd or line to wait in. Depending on the theater, the price may even be lower than for a matinee.

Renting movies is another way we get our movie fix. It helps that we have a nice sized widescreen TV and a decent surround sound stereo system. Watching movies at home has its own advantages. The ability to pause for short breaks being a major one. We often will enjoy lunch or dinner while watching a movie. We can make editorial comments and laugh as loud as we want. I don't have to worry about holding back the tears. We no longer visit the local video store, which, if you ask me, was always a bit of a hassle. Netflix is so much more convenient. They deliver right to the door, there are no late fees and when we are done, we only have to drop the DVD back into the mailbox.

Occasionally we will watch a movie on cable. Truth be told, it's more likely that it will be me doing so. And it's rarely, if ever planned. Those random TV movie moments tend to only come when I am in a television watching mood and just happen to see something interesting on as I flip through the channels. As it is, most of our regular television watching occurs only after we have recorded the show on the DVR to watch. There's something to be said for being able to fast forward through commercials.

As for online movie viewing, I have given that a shot. It's not quite as comfortable and can sometimes be a bit of an inconvenience. It is not my preferred method of movie viewing, but it is an option I like having.

It has been years since we last saw a movie in a drive-in. There is an old drive-in theater in town that I think still plays movies. My husband and I have never actually been to that theater though. I have many fond childhood memories of camping out in the car, which watching movies at the drive-in. I think seeing a movie at a drive-in is something everyone should experience at least once in their lives. 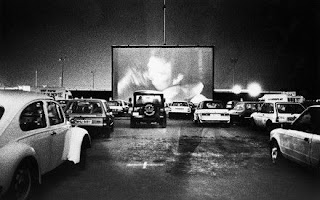