The Way the Crow Flies by Ann-Marie MacDonald 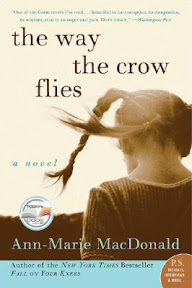 Where Book Came From: I first heard about this book through PAGES magazine. I pulled it off my TBR shelf where it has been sitting patiently since October 2004.

Reason for Reading: This is the second book read for the Chunkster Challenge. A review by a fellow book lover (Lesley over at Lesley's Book Nook) prodded me to read this one sooner than later.

From the Publisher: For Madeleine McCarthy, high-spirited and eight years old, her family's posting to a quiet air force base near the Canadian-American border is at first welcome, secure as she is in the love of her family and unaware that her father, Jack, is caught up in his own web of secrets. The early sixties, a time of optimism infused with the excitement of the space race and overshadowed by the menace of the Cold War, is filtered through the rich imagination of a child as Madeleine draws us into her world.

But the base is host to some intriguing inhabitants, including the unconventional Froehlich family, and the odd Mr. March, whose power over the children is a secret burden that they carry. Then tragedy strikes, and a very local murder intersects with global forces, binding the participants for life. As the tension in the McCarthys' household builds, Jack must decide where his loyalties lie, and Madeleine learns about the ambiguity of human morality — a lesson that will become clear only when the quest for the truth, and the killer, is renewed twenty years later.

Comments: As I sit here trying to decide where to start, I find my eyes welling up with tears. Again. On many levels, I anticipated that, having read other readers thoughts about this book over the last three years and all the glowing reviews and recommendations from fellow booklovers. I just had no idea how much this book would get under my skin, how much of my own life I would see flitting across the pages. Or echoes of it at least. My life was not—and has not been—nearly as dramatic, of course. No war criminals or murders to worry about.

It was more so the little things that I found myself connecting with: the long car rides with my brother and I sitting in the back seat, playing games, sometimes arguing, stopping along the way at various historical landmarks; the packing up and moving again and again, something most military families grow accustomed to no matter the country; making new friends and learning where to fit in; and the security and community of living on a military base; the crush on the teenage heart throb, and the duck and cover drills. Even the search for the missing girl brought back memories of the community at Camp Pendleton coming together to search for a missing child one summer day, the concern and fear clear on everyone’s faces. Fortunately in my reality, the child was found safe and sound, having just wandered off. The novel is also full of pop culture phrases and references that, although some are a bit before my time, are well known enough to be very familiar.

All of this sets the stage for an intriguing and complex story about a family whose secrets begin to erode away their relationships with each other and themselves. Ann-Marie MacDonald painted a vivid and thought provoking novel, in which the reader can empathize with the anger, frustration and guilt that several of the characters struggle with. There is Jack who faces an ethical dilemma that spills over onto his family; Mimi who wants to be a good wife and protect her family as she sees the family unit begin to show signs of cracking; and Madeleine who falls victim to one of the worst kind of predators imaginable.

The Cold War served as the perfect backdrop for the telling of The Way the Crow Flies. It was a time when hopes and patriotism are high after the end of World War II and the focus from the Nazis onto the Soviet Communists shifted. It was peacetime and yet the governments of the Western World stood on eggshells, afraid of what their enemies might do. And while the West raced to be the first to the moon and overcome the East with technology, morality became a little blurrier. Ann-Marie MacDonald weaves the history of the times into her story seamlessly, adding depth and complexity to the characters and each of their stories.

My mind is swimming with thoughts about this powerful novel, and yet, I do not dare lead you down that path for fear of spoiling the story any more for you than I already have.

Favorite Part: What was not to like about this book? Among my favorite bits were the trips it took me down memory lane, Jack and Mimi’s relationship, Mike and Colleen as characters, and the eccentricities of the Froehlich family. I especially liked how well drawn the characters were. Ms. MacDonald did an excellent job of creating a story and character with whom I felt right at home.

Quotes:
If your father is in the air force, people ask you where you are from and it’s difficult to answer. The answer becomes longer the older you get, because you move every few years. “Where are you from?” “I’m from the Royal Canadian Air Force.” The RCAF. Like a country whose bits are scattered around the globe. [pg 12]

Canada was one-third of the great North Atlantic Triangle poised between Britain and the United States. This triangle worked in cunning ways. Under the Lend-Lease plan, many of the airplanes were built in the U.S.—“the arsenal of democracy”—but until the Americans entered the war the planes could not be flown into Canada without violating the United States Neutrality Act. So pilots would fly the new aircraft to Montana or North Dakota and land just shy of the border. Only feet away, a team of horses waited on the Canadian side. The airplane was hitched up and hualed into Canada, then flown to the RCAF stations to supply the British Commonwealth Air Training Plan. [pg 29]

Afterwards, in bed with a book, the spell of television feels remote compared to the journey into the page. To be in a book. To slip into the crease where two pages meet, to live in the place where your eyes alight upon the words to ignite a world of smoke and peril, colour and serene delight. That is a journey no one can end with the change of a channel. Enduring magic. [pg 123]

In pop culture and folk tales, ghosts haunt creepy houses at night, appear in old photographs of church picnics, are glimpsed in the rain-lashed beam of a headlight on a country road amid endless fields of corn. In life, they arrive when you are emptying the dryer at ten a.m.

The shadow is the same. It chooses mundane moments. Like most ghosts, it does not wish to scare you off. It needs to be seen. That’s why it has come. Imagine the sheer exhaustion of making the journey up from the shades time and again, only to have your long lost one shriek and run away. That’s why it learns to approach in the open, when you are engaged in familiar tasks, guard down. Doing the dishes. Driving. It doesn’t necessarily want you to crash, but it does want your attention. [pg 661]

Note About The Author: Ann-Marie MacDonald was inspired to write this novel because of the story of Steven Truscott, then 14, who was tried and convicted of murdering a 12 year old girl, and who to this day maintains his innocence. At my reading of the novel, the Ontario Court of Appeal is reconsidering the matter.

I am the unlucky recepient of a stomach virus and a cold all wrapped in one. Thank goodness for modern medicine.
Posted by Literary Feline at 2/27/2007 07:50:00 PM